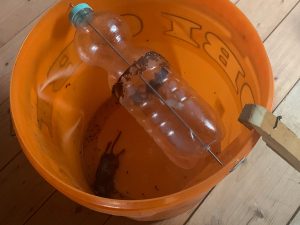 After pimping up the contraption with a little vegetable oil I finally can report success! First little critter trapped, but unfortunately it has died in the bucket.

But why? The oil stands at best about 1mm high on the bottom of the bucket – absolutely not enough to drown in – and it was trapped in there no longer than 5-6 hours – not long enough to die from starvation either. Poor little guy.

Edit: Another casualty, now the death toll is two 🙁 . I think I’ll try a (bought and boring) livetrap from the hardware store now as an alternative.