The garden year is coming to it’s end, so, since it’s still fairly warm for the end of october I decided to late-plant potatoes and garlic for next spring. Yes, it is possible to plant them in late fall and enjoy the following year as they’re very cold resistant and can be buried “in advance” so the’ve got a lead in the early next year.

I did this with garlic already and it worked beautifully, now I also wanted to try potatoes. The whole work was done in under one hour and now I’m looking forward. I will still have to cover the areas with some bark mulch though. 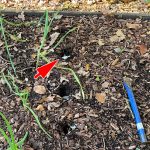 I planted 10 large garlic cloves, tip side up and root side down in two rows. Each 10 – 12 cm apart and about 15 cm deep. The soil was damp enough so that I omitted any additional watering. 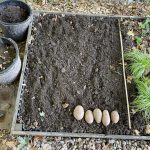 I acquired some nice large potatoes from a local farmer that I know and planted six of them in three offset rows of two each. Other than in spring I put them in much deeper, about 25 cm and hope they’ll survive.

I took the idea from german gardening blog Wurzelwerk (“rootwork”). Pay that girl a visit on her (german language) website or on youtube – she’s nice and she really knows her stuff.