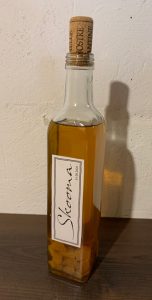 Whoever has played Bethesda’s Elder Scrolls Series with enthusiasm and dedication like me will know what “Skooma” is. As I got the official Elder Scrolls Cookbook these days, the first recipe to try for me was – of course – Skooma. By the way: I highly recommend the book, just for the fun!

Here’s the recipe for that booze that I copied and loosely translated from the mentioned above book. I will not post any more of them here since they’re all copyrighted, I just couldn’t resist this one. But hey, Skooma itself is highly illegal in the whole world of Tamriel!

“Khajit has warez if you have coin” 🙂