So the new chickens moved in today and after an hour or so of being a little sheepish and insecure they became curious and lively, digging around, cackling and exploring their new home. We delibertely chose races that are suitable for the beginner and thus also might forgive the one or the other beginner’s mistake – we want them to be happy and thrive. We’ve got:

“Schakkeline“, “Hilde” and “Priscilla“. This race is of english origin, where it is a widespread and well reknowned all-purpose type of chicken. It’s beginner-friendly, hardy and easy to raise, so, ideal for me as a beginner. They come in a range of varieties, where we chose the most common  white and “dark” variants. They are not very eager to fly and don’t require a lot of space.

“Waltraud” and “Henriette“. Another allround race, but of german origin. Also very beginner friendly and rather undemanding, they are a little more lively than the Sussex but likewise not very keen on flying around. Instead, mine seem to like to cuddle. They’ve got an interesting color and feather pattern. 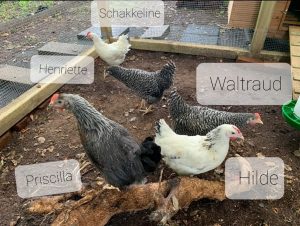