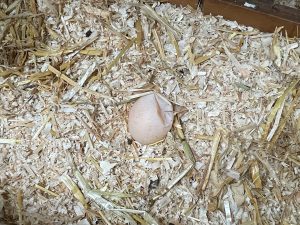 Priscilla laid a so-called wind egg the last days, the first one I ever even saw in real life. It’s a complete egg, but with only a membrane, thus just missing a calcium shell. They were called cock’s eggs traditionally since it was believed they were laid by cocks in former times.

Here’s wikipedia’s information on this (german language, since unfortunately the english version isn’t worth a dime).

As stated above, wind eggs are laid only with a thin mebrane but without a hard calcium outer shell. They’re not edible since they’re prone to bacteria and infections the second they’re out of the chicken’s body, so they must be discarded right away.

Normally not. Wind eggs can result from either a simple “hiccup” in the hen’s ovogenetic process (which is the most common reason), a lack of calcium or, seldomly (but then it IS dangerous), an infection of the oviducts.

What can I do?

If hens do continue laying wind eggs, try to supplement chalk to their nutrition, for example with grit or special chicken feed containing more calcium. You can also offer a Vitamin D supplement, enabling the chickens to build up calcium easier internally. If it’s an infection, of course visit a vet.