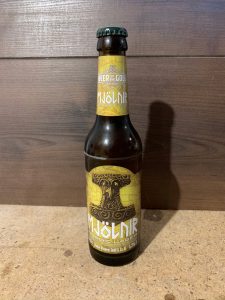 The next beer’s name is known to everybody from the Marvel movie “Thor” (though its story heavily messed up in that film):

Mjölnir is the hammer of Thor, the Norse god associated with thunder. Mjölnir is depicted in Norse mythology as one of the most fearsome and powerful weapons in existence, capable of leveling mountains […] In the Old Norse texts, Mjölnir is identified as hamarr “a hammer” […]

They wanted to make Mjölnir very traditional, hence it is unfiltered and you can taste that. It’s a Lager and for that, it is surprisingly strong with 5.3% vol. It’s fruity and just a little acidic, easy to have one or several of it. It’s a pleasant beer – a very dangerous drink on hot days 🙂