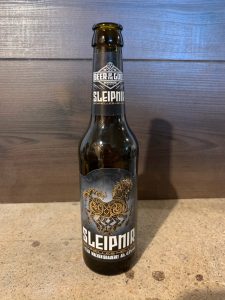 I got 4 different sorts of craft beer as a gift for my birthday this year, all made by Wacken Brewery (yes, correct, that “Wacken” the well-known northern german heavy metal festival). They make several types of beer, all named after nordic deities with their names explained and elaborately designed bottles.

I want to try them one each day and leave my opinion. So yesterday’s number one was:

“In Norse mythology, Sleipnir (old Norse “slippy” or “the slipper”) is an eight-legged horse ridden by Odin […] it is the child of Loki and Svaðilfari, is described as the best of all horses, and is sometimes ridden to the location of Hel […]”

“Sleipnir” is a pale ale (german: “Helles”). Thus, it’s an easy, casual and refreshing drink and not too heavy – it’s a good thirst quencher with a slightly dry hint. For my tastebuds, it is almost a little bit too fruity, but nonetheless delicious and a nice cold treat.