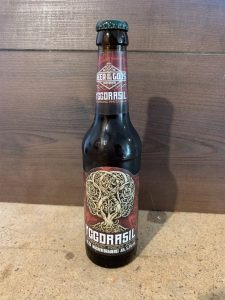 So now for last candidate in the taste test series. The famous

Yggdrasil is an immense ash tree that is center to the cosmos and considered very holy. The gods go to Yggdrasil daily to assemble at their things […] The branches of Yggdrasil extend far into the heavens, and the tree is supported by three roots that extend far away into other locations; one to the well Urðarbrunnr in the heavens, one to the spring Hvergelmir, and another to the well Mímisbrunnr. Creatures live within Yggdrasil […]

“Yggdrasil” is a red ale type of beer, unfortunately – for my taste – an all too red red ale… It is very fruity, even “juicy” if you want to put it like that, and for my feel overly sour. Definitely an unusual drink that you have to get acquainted to. People might like it but it surely is not an everyday casual drink.